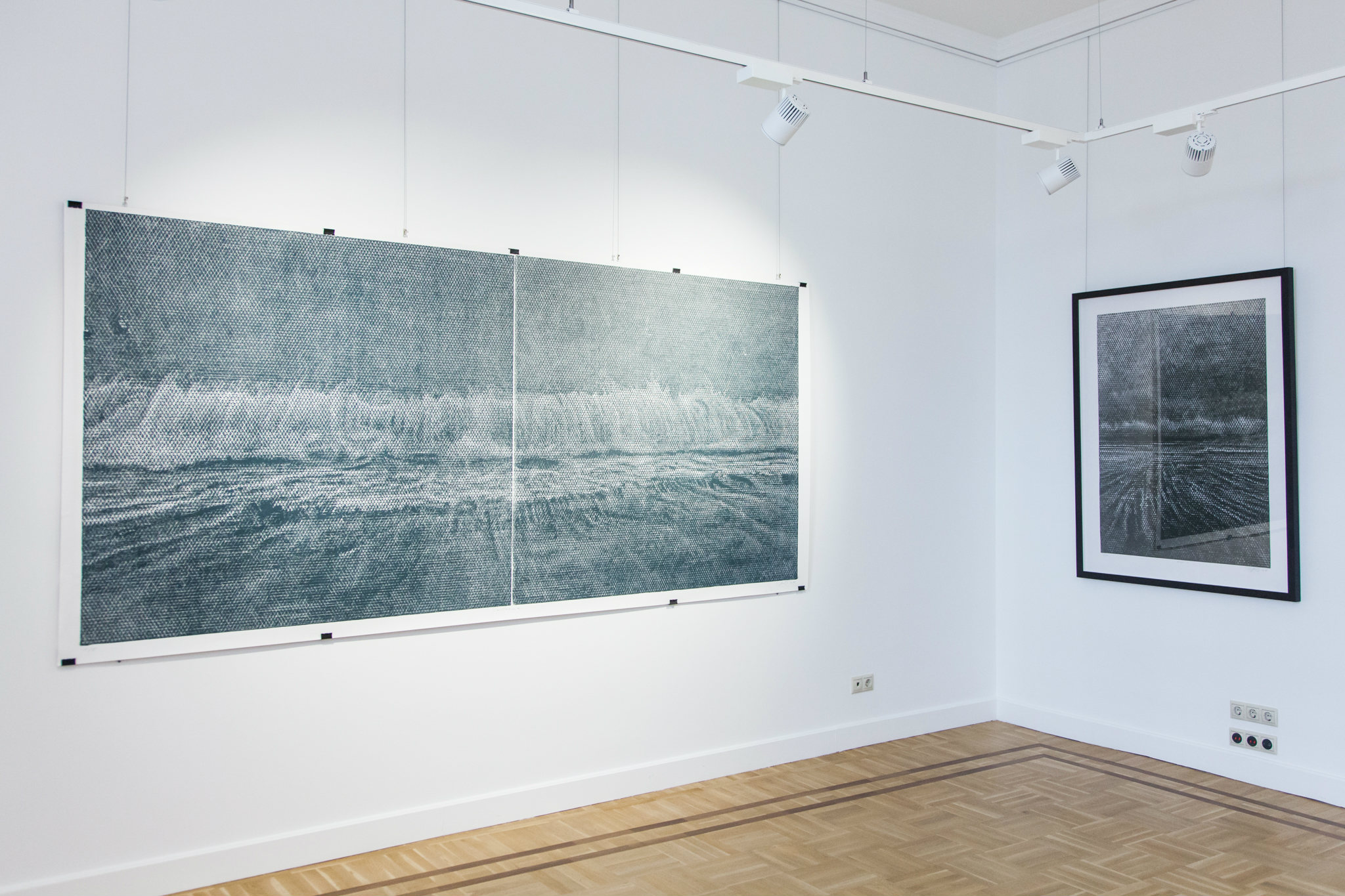 The series of Stefan Osnowski is closely related to his earlier big size woodcuts, that he exhibited with the name Passage in the Resident Art Gallery in 2017. In his latest series called ENTRE – between the artist continues to follow the principle of creation based on strict rules, but this time he enriches the parallel network of lines with diagonal prints. The resulting system makes the surface into lattice structure that consist of triangles, that is geometric, and while observing it from close, it can be called an abstract net. While the starting point of the woodcut is still the moment of the stationery picture of the visible world, or rather, at the intersection of the place where the lines cross each other, the works of art get one step closer to geometric abstraction or we can say: to the resolution of the printing technology , where points are born, that resemble the pixels of a digital photograph.

The serie of large-scale monochromatic woodcuts shows images of an empty Seascape on the west coast of Europe, in southern Portugal. This landscape is characterized by its broad boundlessness.
The composition of each image always follows the same strict classical principle: The Focus goes out to the sea to an endless horizon in the distance that divides the image exactly in the middle. The upper half of the picture portrays a cloudy sky during the twilight of the dawning night. In the lower half the ocean and waves break in endless repetition on the shore and blur the border between land and sea.

These pictures are absolute in their dissolution, which evokes a BETWEEN: The invisible line between sea and sky, water and earth, between day and night, and light and darkness, between fluid movement and complete standstill. They are snapshots that capture the back and forth of water crashing onto the shore, and losing itself in the sand only to be retracted a few moments later to throw itself against the shore with renewed force.
The original digital photographs are transformed during a month-long time-consuming handwork into a digital barcode which will be carved into wood to be finally printed by hand on paper. The use of any mechanical equipment is deliberately avoided. The traditional analog printing of images and the associated loss of information compared to the original photographs, exerts a peculiar tension by underlining the contrast between the digital immaterial image and the handmade physical print.